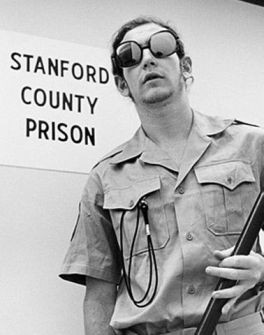 ucted by Philip Zimbardo in 1971. The first, “Rethinking the Nature of Cruelty: The Role of Identity Leadership in the Stanford Prison Experiment” (Haslam, Reicher, & Van Bavel, 2019), discusses the outcomes of the SPE within the context of social identity and, specifically, identity leadership theories espousing, among other things, the idea that “when group identity becomes salient, individuals seek to ascertain and to conform to those understandings which define what it means to be a member of the relevant group” (p. 812) and “leadership is not just about how leaders act but also about their capacity to shape the actions of followers” (p. 813). It is within this context that the authors conclude from their examination of the SPE archival material that the “totality of evidence indicates that, far from slipping naturally into their assigned roles, some of Zimbardo’s guards actively resisted [and] were consequently subjected to intense interventions from the experimenters” (p. 820), resulting in behavior “more consistent with an identity leadership account than…the standard role account” (p. 819).

In the second article, “Debunking the Stanford Prison Experiment” (Le Texier, 2019), the author discusses his content analysis study of the documents and audio/video recordings retrieved from the SPE archives located at Stanford University and the Archives of the History of American Psychology at the University of Akron, including a triangulation phase by way of in-depth interviews with SPE participants and a comparative analysis utilizing various publications and texts referring to the SPE. The purpose of this research was to learn whether the SPE archives, participants, and comparative analysis would reveal “any important information about the SPE that had not been included in and, more importantly, was in conflict with that reported in Zimbardo’s published accounts of the study” (p. 825). Le Texier derives a number of key findings from his study that shed doubt on the integrity of the SPE, including the fact that the prison guards were aware of the results expected from them and what they had to do to achieve those results, “the participants were almost never completely immersed in the unrealistic prison situation” (p. 825), and the data collection and reporting process was “incomplete and biased” (p. 825).

Both articles were fundamentally supported by new details on the research method and the participants obtained from SPE archival material released online by Stanford University in 2018. It is by way of this new information that researchers are able to more fully examine the integrity of the research design and explore such questions as: What was the experimenters’ leadership role in the SPE? How did this leadership role – that is, how did the experimenters – affect the outcomes and, specifically, the level of cruelty exhibited by the guards? and To what extent did the phenomenon of “demand characteristics” – associated with the experimenters’ interactions with participants that emphasized the importance of the SPE, the special status of the participant (as someone carefully selected by the research team), as well as experimenters’ coaching of the guards – impact participant behavior?

Disclosing methodological components of our research designs and sharing data are essential to becoming a contributing member of the research community. It is this obligation of transparency that ultimately rewards researchers by raising the bar on methodological integrity while bringing “quality issues to the forefront, leading to scholarly discussions and more explicit and critical self-evaluation, as well as new quality approaches to [research] design, implementation, and reporting” (Roller & Lavrakas, 2018, p. 396). The two articles discussed here concerning the SPE are indicative of how data sharing can help us think more deeply about the implications of our research designs and better understand those of others. In particular, the public discourse that has arisen in light of the recently released SPE archival material has led to healthy discussions such as this interview with Philip Zimbardo conducted in 2018 where Zimbardo is asked “What is the case that this experiment should be seen as anything more than an anecdote?” and “Do you think the experiment itself has a definitive scientific value?” And, importantly, where Zimbardo is given the opportunity to respond, stating “[The SPE is] a very powerful demonstration of a psychological phenomenon, and it has had relevance.” and “The single conclusion is a broad line: Human behavior, for many people, is much more under the influence of social situational variables than we had ever thought of before.”