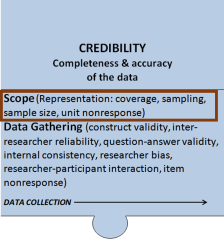 designs and helps to guide their decision making. The TQF consists of four components, with each component devoted to the critical thinking considerations associated with a phase in the research process. The first component of the TQF is Credibility which is focused on data collection; specifically, Scope and Data Gathering. One of the many considerations related to Scope has to do with the sample design.

The following is a modified excerpt from Applied Qualitative Research Design: A Total Quality Framework Approach (Roller & Lavrakas, 2015, pp. 25-26) on the different aspects of sampling that researchers might want to think about as they develop their qualitative research designs.

Once the researcher has identified the list (or lists) that will be used to select the sample, a decision must be made about which sampling approach will be used. If the decision is to gather data from each member of the population on the list (e.g., all 20 students enrolled in an honors science class), then there is nothing more for the researcher to consider. But for those studies where something less than the entire population will be chosen for study, additional Total Quality Framework (TQF) decisions need to be made about sampling.

Here, qualitative researchers may needlessly lessen the quality of their studies by not giving these decisions sufficient consideration. In fact, some qualitative researchers may think that how they create a sample of the population is unimportant. Qualitative researchers may proceed in this manner because they mistakenly believe that systematic sampling is too hard to carry out (i.e., too complex, too expensive, and too time-consuming) and that it is “too quantitative” a concern. Yet, in the vast majority of qualitative studies, systematic sampling is neither complex, expensive, nor time-consuming, and should not only be a quantitative issue. And by using an organized approach for choosing which members of their key population to study, as opposed to merely using a convenient and disorderly approach to sampling, qualitative researchers avoid a major threat to the credibility of the data they gather. That threat is the possibility that those from whom they gather data are not, in fact, representative (do not share defining characteristics) of the population being studied.

Take, for example, a focus group researcher that has a list of men and women who completed a cardiopulmonary resuscitation (CPR) training class in the past year. The researcher can choose one of two basic approaches to selecting those who will be invited to participate in a group discussion. The often-used but misguided approach is to start at the top of the list and contact people, one after another, until the focus groups have been filled with ostensibly willing attendees. The rigorous and correct approach is to use an organized scheme to sample CPR class graduates from across the entire list (i.e., stratifying the list and taking an ‘nth’ name approach). The second approach is preferred because it avoids the possible problem that the names on the list are ordered in a way that is not representative of the entire population of CPR graduates that the researcher wants to study.

A final TQF issue related to choosing a sample applies to qualitative studies that utilize observations of naturally occurring human behavior to gather data, such as in ethnographic research. In these studies, sampling considerations need to be applied to the times and the locations during which the behaviors of interest will be observed. By systematically choosing which locations and which times to conduct the observations—among all possible locations and times in which the behaviors of interest will be taking place—the qualitative researcher is greatly raising the likelihood that the observations included in the study are a representative subset of all the possible behaviors of interest to the study.

To see this and other slide decks on best practices in research methods and design, go to https://www.slideshare.net/MargaretRoller.

The background and literature review section of the Total Quality Framework (TQF) proposal provides the context for the research question(s) and/or hypotheses that the proposed research is designed to address. In this section, the proposal author must not only put forth the questions/hypotheses under study, but provide support as to why these are the ones that merit investigation. In doing this, the author should rely on the TQF to bolster the logical arguments that are advanced in support of these research questions/hypotheses.

The extent to which the research questions revolve around quality-design issues will depend, in part, on the results of the literature review and the nature of the research topic. For example, a proposal to study physician–patient consultations might state the primary research question as “What are the main factors that appear to contribute to the frequency and type of conversations concerning cancer patients’ sexual functioning among a representative sample of a clinic’s oncology physicians?” The researcher may or may not harbor a hypothesis along with the research question. However, depending on the literature review, the researcher might enter into the research hypothesizing, for example, that the frequency and substance of physician–patient conversations concerning sexual function are associated with how closely the physician’s demographic characteristics (e.g., age, gender, and race) match those of the patient. Or, a proposal on this topic may focus on methodological, rather than substantive, hypotheses such as noting TQF flaws in past research and hypothesizing that the author’s proposed methods for the new study will avoid the problems of earlier research (which the researcher may believe led to biased findings and ill-advised recommendations) and thereby result in outcomes that are more credible and therefore more useful.